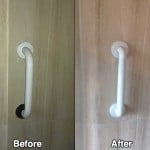 A grab rail in Coolock, Dublin 17 – this grab rail was in an elderly couples house on Dublin’s north side. The original grab rail had corroded as it had been installed inside a shower unit. It was replaced with a robust plastic model to prevent future corrosion. Not all plumbers work involved pipework and fittings, as this little job shows. 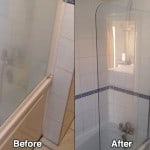 A bath screen in Raheny, Dublin 5 – another example of a Dublin plumbers job that doesn’t involve pipework and fittings. This old bath screen had seen better days in an apartment on Dublin’s north side. The rubber seal that should prevent water from leaking between the bath and screen had completely worn away, allowing water to leak out onto the floor and into the hall soaking the carpet. The old worn out bath screen was replaced with an all glass single panel bath screen that added a more modern feel to the bathroom. The old silicone was also removed from around the edge of the bath and fresh sanitary silicone applied for that extra water seal. 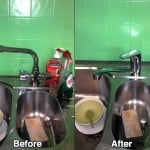 A kitchen sink mixer tap in an office canteen in Ringsend, Dublin 4 – this old mixer tap had become very hard to open on the hot side and leaked from the base of the spout every time it was used. Instead of fixing it was decided that it was best to replace it with a more user-friendly lever tap. Kitchen sink lever taps are the most common type of tap installed by Dublin Area Plumbers. 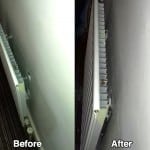 A radiator hanging off a wall in Ballsbridge, Dublin 4 – this rad in a kids bedroom in Ballsbridge had to be completely disconnected and removed in order to repair it. The brackets holding the rad on the wall had pulled the screws through the plasterboard leaving large holes in the wall. The brackets had to be relocated to a solid section of wall in order to get a good fixing. The gas heating did not have to be drained down in order to rehang the rad. A leak on one of the rad valves was easily fixed by simply tightening the nut beneath. 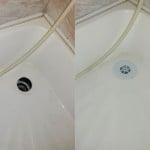 A broken shower waste in Howth, County Dublin – this showers was in a house in Howth on Dublin’s north side that was just purchased by a young couple. But every time they used the shower upstairs, water came pouring down into the kitchen below. It turned out that the shower trap had snapped off under the shower tray. This was a very difficult plumbing job as the shower tray was sitting on the floor with no access underneath. After a lot of trial and error, the new trap was installed with no damage to the area surrounding the shower tray or the ceiling below.

4 thoughts on “A selection of work carried out by Dublin Area Plumbers over the last few weeks. ”