This week, the Dublin Area Plumbers team repaired some more shoddy work by cowboy plumbers! It’s sad to see so many people being taken advantage of by these so called “plumbers”. 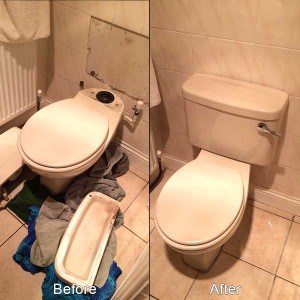 We seem to be constantly in the wake of cowboy plumbers these days. A 90 year old lady in Foxrock South Dublin had a problem with her ensuite toilet. It wouldn’t flush so she called a local plumber. He arrived and replaced the siphon, a simple job for any plumber. After he left the lady discovered water on the tiled floor so she called him back. The plumber came back and supposedly fixed the leak. 2 weeks later water came pouring down through the living room ceiling directly under the ensuite bathroom. The plumber was called back again for the third time. He took the toilet apart and told the 90 year old lady that she had been pushing down the flush handle to aggressively and loosened the siphon causing the toilet to leak out onto the floor. He recommended that he return the following day and install a push button flushing mechanism for an extra charge. The lady was totally frustrated at this stage and called us for a second opinion.

What we found when we arrived was truly unbelievable. The cistern was lying on the floor and towels were wrapped all around the toilet, soaking up the water from the leak. This so called plumber had left this lovely lady in an awful state.

Within half an hour of our arrival the toilet was put back together and working perfectly with no leaks. We also installed a new fill valve as the existing one was pretty worn out.
The reason it had leaked after the last plumber and caused damage to the ceiling below is because no silicone sealant was used when the siphon was being installed, a schoolboy error. This leak could easily have been avoided. 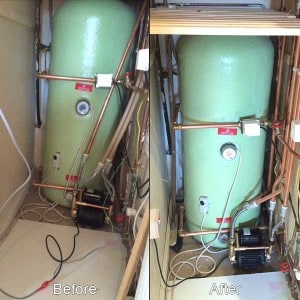 This week we got a call by a lovely lady in Ballsbridge South Dublin 4. She asked could we tidy up messy pipework left behind by her previous plumber. What we found was not just messy and untidy plumbing work, but dangerous electrical work as well.

We repiped the shower booster pump with copper pipework and completely rewired the electrical connections. We relocated the switched spur lower down the wall which enabled the shower booster pump to be wired directly in which is what should have been done in the first place. We seem to be getting more and more of these calls lately. The worst thing is this plumber came recommended.