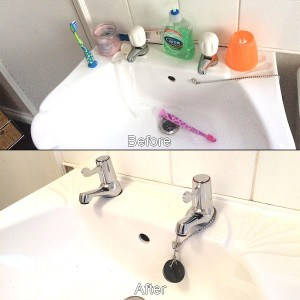 Balbriggan, North County Dublin is an area we get called to quite a lot these days.

The kids in this house found it hard to turn on and off the original basin taps, especially with wet hands. So we installed quarter turn lever taps for them. The new quarter turn wash hand basin taps were the best option and easiest for the kids to use.

The kids in this house now have no more excuses for not brushing their teeth. 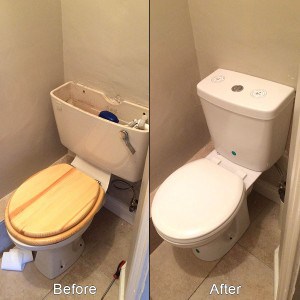 A new toilet was required to freshen up this guest WC in Knocklyon South Dublin 16.

The original cream coloured toilet had seen better days and was beginning to look tatty.

We installed a brand new modern “dual flush” close coupled toilet, which instantly brought this tired guest WC out of the history books and into the modern day. 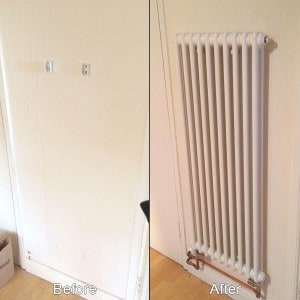 We installed a nice feature rad for a man in Kilmanham Dublin 8 during the week. He wanted the radiator mounted on a small wall between the kitchen and hall doors so he could utilise the wall space the original radiator was hung on.

We drilled 2 small holes through the wall a low level which brought us out into the hall. We took flow and return connections off the existing hall radiator and piped through into the living room with 1/2 copper pipework.

We think it turned out very well and this customer was delighted to come home to his new piping hot radiator. We at Dublin Area Plumbers always insure no mess is left behind after work has been carried out in your home or place of work. 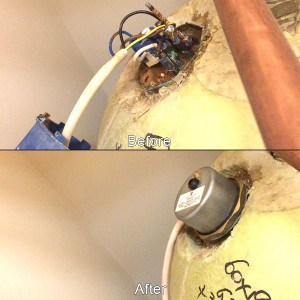 We got a call to a house in Ballsbridge South Dublin 4 where an immersion was in very bad condition and no longer heated the hot water cylinder.

Most hot water cylinders heat via a gas boiler, but it is always a good idea to have an immersion as a back up in case your boiler stops working for any reason. Changing immersion groups is another very common job for a plumber in Dublin and requires electrical wiring know how.

A good plumber would have a lot of experience in electrical connections. Connecting immersions, booster pumps and boilers etc to mains supply is a large part of a plumbers job.

A good plumber will never have to call an electrician to wire up an immersion. 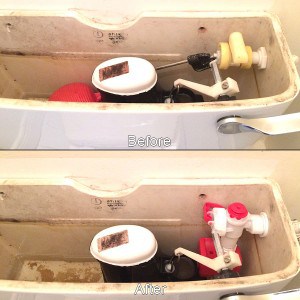 In Ranelagh South Dublin 6 a ball valve needed replacing as the toilet took hours to fill, this is a very common complaint.

The internal rubber diaphragm had perished and was stuck in the off position. We replaced it with a modern silent cistern filler valve.

The toilet cistern now refills within a couple of minutes after flushing.