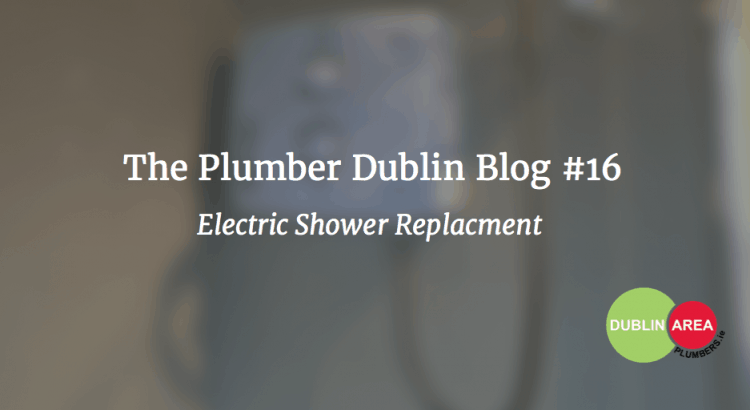 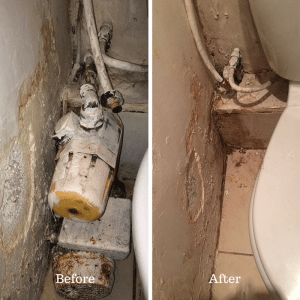 This is a mains booster pump in a rental property in Ringsend Dublin 4 that hadn’t worked for years.

Although it wasn’t working it was still left in position which was right beside a toilet. It eventually started to leak and cause damp to appear on the adjacent wall.

Dublin Area Plumbers where eventually called to sort it out. The only thing to do was completely remove it and reconnect the pipework directly to the mains again. The wall will have to dry out before any redecorating is done. 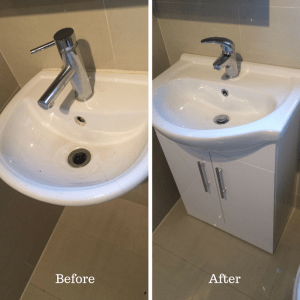 In Knocklyon Dublin 16 a customer inherited a cracked wash hand basin from the previous home owners.

The waste pipe was badly blocked too but the trap was inaccessible due to the semi pedestal being siliconed to the wall and unable to be removed. We were able to remove the complete unit without breaking any tiles and installed a wash hand basin with a storage cabinet beneath.

When the original basin was removed we were able to unblock the waste pipe and refit it to the new one. This wash hand basin with cabinet beneath came it’s new mixer taps and a spring loaded waste. 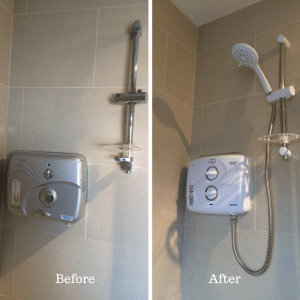 Also in Knocklyon Dublin 16 this electric shower had stopped working. The simple solution was to replace it.

We replaced it with a similar model Triton T90 which meant we could use the original screw holes, so no unsightly holes were left in the tiles when we finished.

The customer opted for a white shower casing but the Triton T90 electric shower is still available in a chrome finish. With a new shower comes a new shower head, hose and shower rail.

To save you from worrying if your plumber will be on time or will do an honest job for you, we give you the Dublin Area Plumbers guarantee. All your repairs and installations are guaranteed for 12 months. You can rely on quality workmanship conducted by qualified experienced heating engineers and plumbers (certified by RGI for gas work and OFTEC for oil work). Being friendly is a courtesy, but if you have a plumbing emergency in the middle of the night, service with a smile can make things just a little more bearable. For your added safety, all of our heating engineers and plumbers are uniformed and carry ID cards so you know exactly who is calling. If you need a plumber in a hurry, we are able to send one from one of multiple locations around Dublin and its surrounding areas. We can have a plumber with you within 1 hour of your call. Just another way Dublin Area Plumbers can help you with your plumbing and heating needs. Dublin Area Plumbers is an established and reputable plumbing and heating company with over 22 years experience and many repeat customers. For a list of our commercial customers see our client page. Our aim is to provide a second to none plumbing and heating service tailored to your specific needs and to be the company you would recommend to a friend, neighbour or business associate. Your home or place of business is important to you and you want a plumbing professional that respects it. Dublin Area Plumbers understands that you value cleanliness and tidiness. Our plumbers will leave your property clean and tidy when they finish, if you think they haven't we'll fix it free of charge.
Message
Call Now