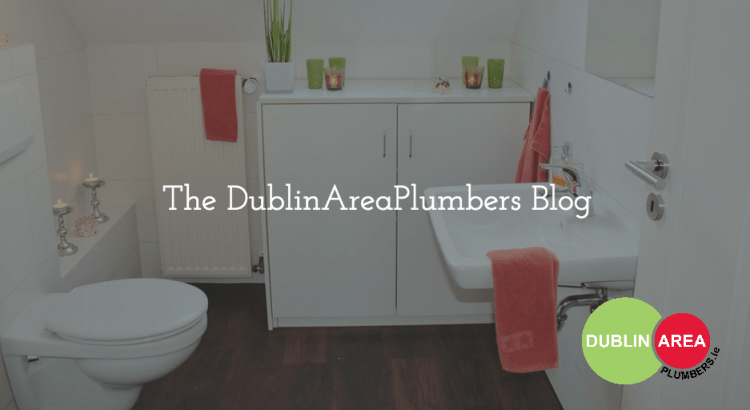 In the plumbing and heating services business, you could start off your day in Swords North County Dublin and end your day in Blackrock South County Dublin.  While the bulk of our calls are city centre, over the last couple of months we have been called out to the suburbs quite a lot. For example, we have carried out plumbing repairs in Swords and Malahide, Heating repairs in Blackrock and Monkstown and boiler repairs in Castleknock and Blanchardstown. Here are just a few examples. 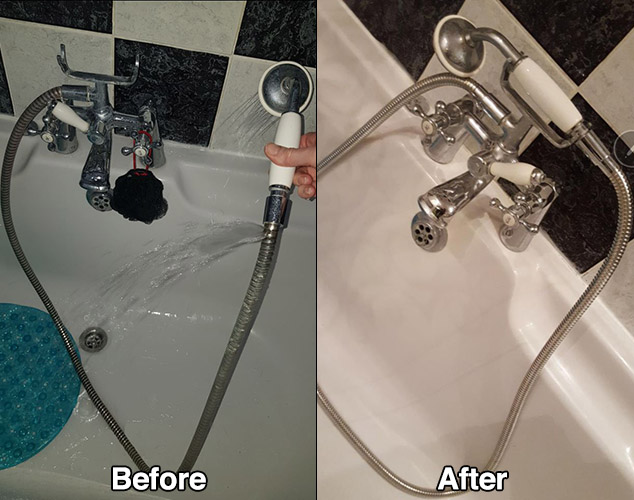 This was a call we got from an existing customer in Blanchardstown. The hose from the bath/shower mixer set had completely split and needed to be replaced.

The only problem was our customer wasn’t able to disconnect the hose from the shower head and the bath/shower mixer tap. A simple job for a good plumber in Dublin but can be a problem for a householder without the proper tools and fittings. 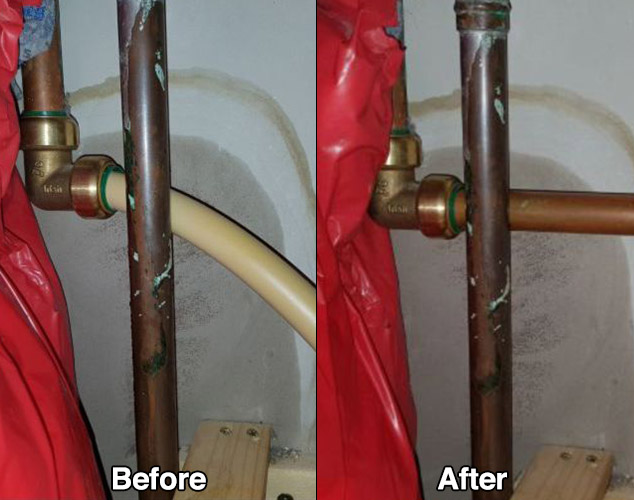 So often we get calls from customers looking for us to fix up botched plumbing jobs carried out by people calling themselves plumbers in Dublin but have no business being in people’s houses and destroying them through incompetence.
This is an example of a guy who advertises as a plumber in Dublin but who definitely is not!

Not long after he had left this house the homeowner noticed a wet patch on the kitchen ceiling. When she went to the hot press on the landing she discovered water spraying out of one of the plumbing fittings that the so-called plumber had installed. After calling the guy numerous times to come back, he eventually switched off his phone and has disappeared.

Completely frustrated, the homeowner called Dublin Area Plumbers. We got out to her on the same day and had it fixed in no time. The problem was that the original guy (not a plumber) used a push fit plumbing fitting which can be used in the correct circumstances, this was not one or them. When using push fit plumbing fitting there must be no strain at all on the fitting. But as can be seen in the pics this fitting was under a lot of strain from the connecting pipework.
We turned the water off, removed the plastic pipework from the fitting. A copper pipe was then installed comfortably into the fitting, leaving it under no stress at all. The water was turned back on, the fitting and pipework tested. Job done, customer happy! 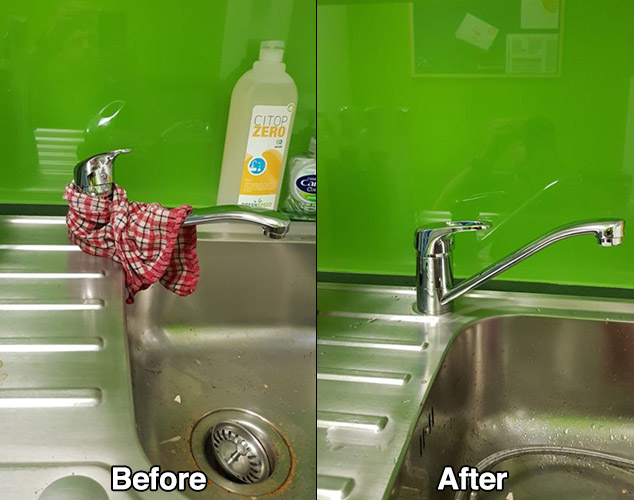 Usually when we get calls about leaking taps it’s about a dripping tap or a tap that just won’t shut off properly. This tap in an office staff room in Dublin 2 was leaking from the body of the tap itself. The leak had gotten progressively worse over time until not even a tea towel could hold the water back! When a kitchen sink mixer tap leaks from the body like this one there is only one option and that is to replace it completely. Kitchen sink tap replacement is a fairly simple job for a good plumber and once we arrived on site it was replaced with a new one within an hour. 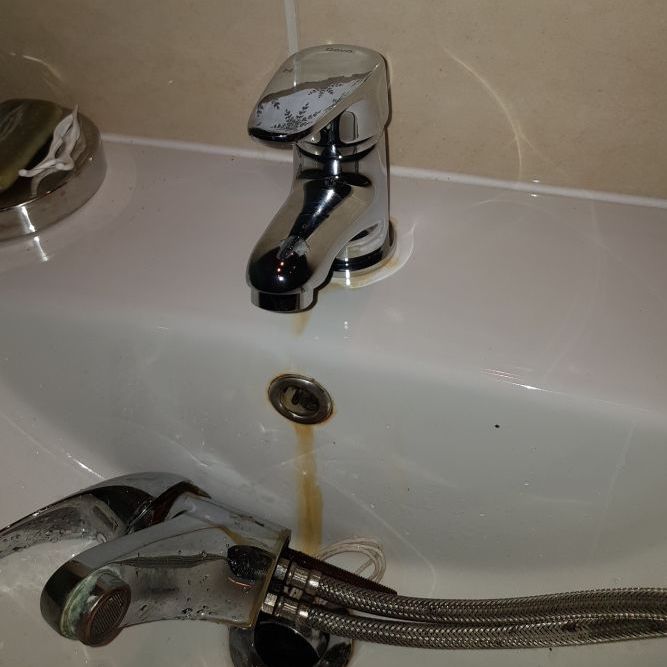 This was another tap leaking from the body of the tap but this time it was in a bathroom of an apartment in Malahide. This tap had been leaking for a long time and had begun to rust the outer body of the tap and leave a rust stain on the wash hand basin. Like the kitchen sink tap, there was no way to repair it so it was replaced. Replacing a bathroom wash hand basin tap is not as straightforward as replacing a kitchen sink tap as the space around the plumbing fittings and fixing bolts on the bottom side of the wash hand basin can be very limited and difficult to get tools into. Taps are normally fitted before a basin or sink is installed originally so it’s always more difficult to retrofit new taps onto an existing bathroom basin or kitchen sink. Never too difficult though and we always get the job done! 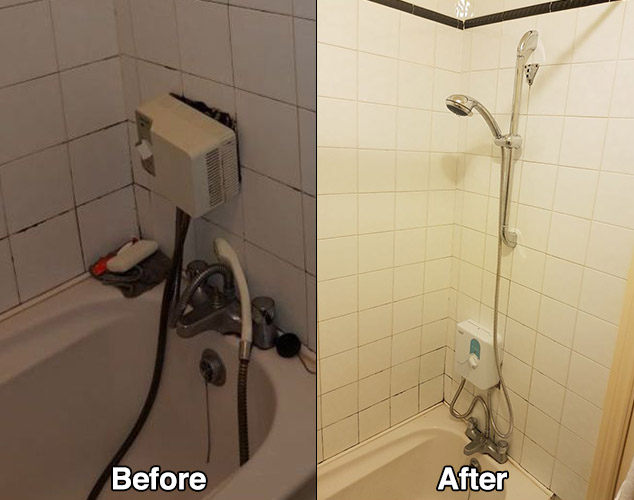 In some older apartments, the way water is boosted for showers is through a pump on the wall, usually, a “Triton T40” fed by a bath/shower mixer tap. The bath tap has to be turned on before the pump and turned off after the pump, otherwise, the pump runs dry, which is not good for any pump. We come across T40’s less and less these days, when they start to give trouble they can limp along for a long time until they finally stop working altogether. This old Triton T40 had seen much better days in the past and was long overdue a replacement.
Not alone that, there was no holder for the shower head so the girls in this rented apartment in Swords County Dublin were having to hold the shower head in one hand and wash hair with the other, while the shower worked whenever it felt like it. Not an ideal situation!
we installed a brand new Triton T40 and also a brand new shower hose, head and shower rail kit. The immersion timer was also not set up properly in this apartment so hot water was hit and miss at best. The immersion stats and timers were then set up correctly with the immersion switch boost and overnight timer heating the hot water cylinder up in time for morning showers. 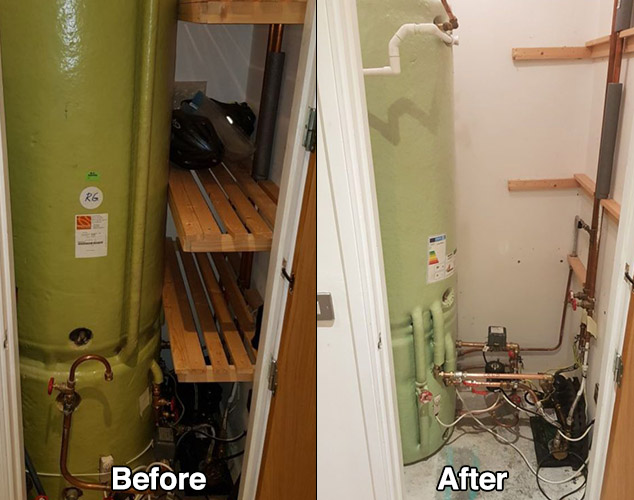 In most apartments built within the last 10 to 15 years, you will find combi cylinders. They combine hot and cold storage water within the one large storage unit, hence the name. They are a great space-saving way to store water in an apartment. This combi cylinder was installed in an apartment in Ballsbridge Dublin 4. It had a heating coil running through it to allow for hot water from the gas boiler. The heating system in this apartment kept loosing pressure but signs of water escaping were nowhere to be found. After some testing was carried out it was discovered that the heating coil was leaking inside the hot water cylinder, so the entire combi cylinder had to be replaced. We replaced it with a narrower one because the customer wanted more storage space inside the hotpress. The new combi came with a rapid recovery coil, which means that the cylinder will get hot twice as fast as the standard coil in the original combi cylinder. This job took a full day to do and worked out perfectly with the heating system now holding pressure and the hot water heating up from full cold to full hot in about a half an hour.

So much more plumbing and heating services were carried out by Dublin Area Plumbers over the last couple of months, far more than can be written in one Plumber Dublin blog post. Stay tuned for more examples of the work we do in and around Dublin City.